Le Cetine, there we are. The reborn starts from here? 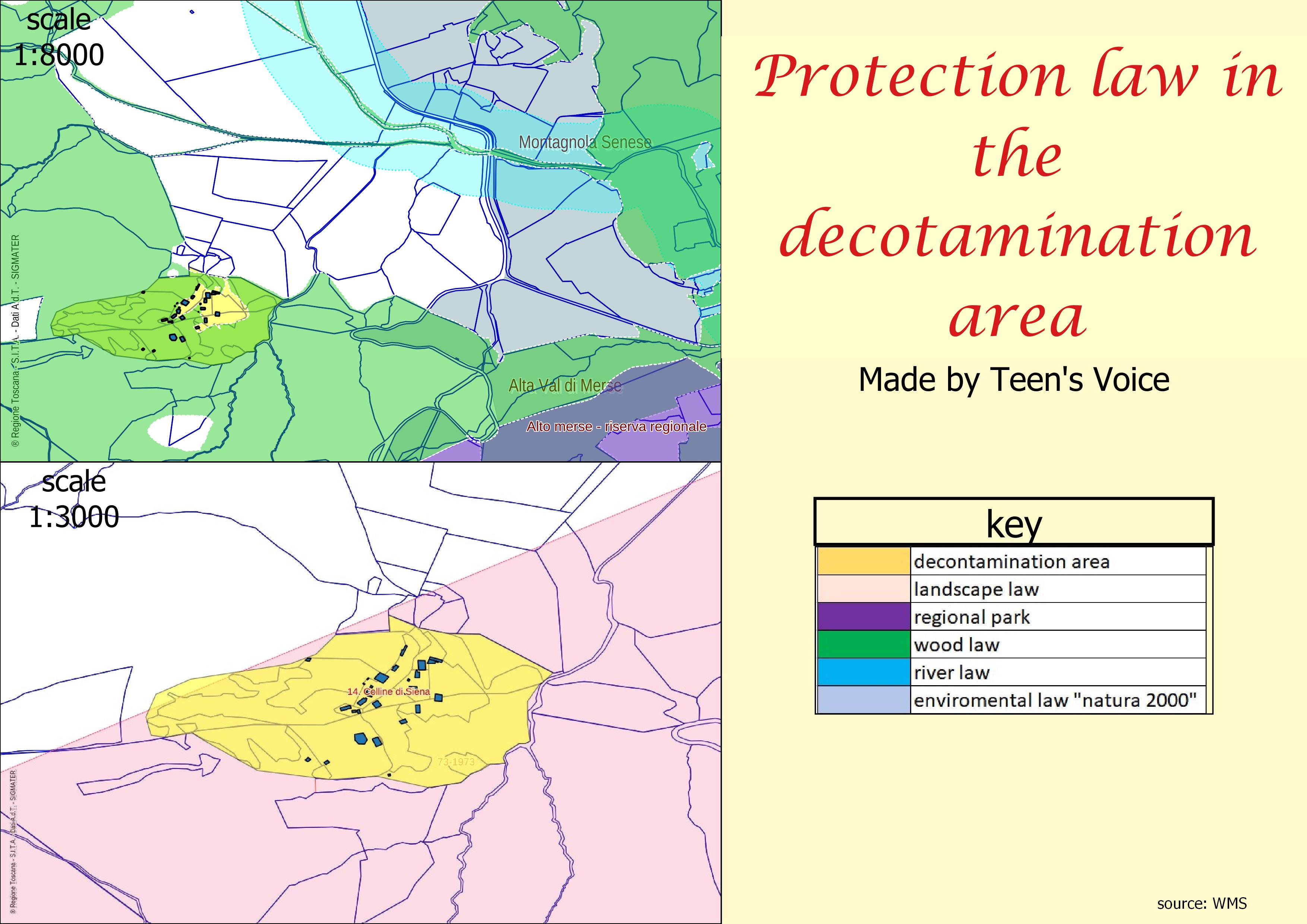 Evaluating a decontamination project, requires technical understanding of the national and local laws, chemistry of the polluting elements and history of the territory. Therefore, the analysis started from the reconstruction of the history of the mine, helped by “Archivio Minerario Villasalto” (Sardinia). Right after that, it was necessary to determinate the entity of the main polluting substance: antimony. How does antimony interact with plants and animals? How can we establish the rate beyond which it must be considered as contaminating? Which is the proper method of decontamination of antimony? We have tried to answer this question by consulting geologists and reading both local and national decontamination laws. After understanding what we were dealing with, we couldn’t ignore the local institutions. We went through local urbanistic plans and environmental law in order to determinate the amount of carbon dioxide released by cutting down the woods. Here is what we have discovered.

Firstly, Etruscan lived in the area from VII century b.C. and during the middle age antimony, which was superficial, was probably used in traditional activities, as a drug or coloring substance. Piccolomini, a noble family of the area, began the mineral cultivation in 1878, but it was only at the end of the XIX century that the mine was significantly exploited. The mining activity was mainly present during the war times as antimony was used to strengthen the bullets. The mining technique and plant used in Le Cetine was mostly built by Sardinian specialists. They built several structures helpful for the transformation of the mineral, such as “Crivello sardo” and tank furnace. Many underage people were exploited in the mine. Due to the Nazi-fascist bombarding after the Ally arrival in 1943, the plant was destroyed therefore the antimony mined was shipped to Sardinia and processed in Su Suergiu mine. Throughout this period several new minerals were starting to be discovered. During the twelfth century the mine was owned by Emilio Ambron, a Jewish painter, and Accademia Musicale Chigiana. After that the ownership passed part to the region part to Siena district. Meanwhile, in 1999 the Chiusdino’s major tried to shift the mine into mineral park without succeeding because included in the list of sites to be reclaimed.

In order to measure the antimony’s rate, it is necessary to determinate its natural value which is difficult because of vastity an heterogeneity of the Colline Metallifere. After finding this value, it needs to be compared with the mine’s value. The D.Lgs. 152/2006 states that the values of antimony shouldn’t overtake by more than 10 the natural values if we are talking of residential or green areas. Antimony doesn’t influence the plants life, as it remains in the roots, but is particularly dangerous if it is mobile as it can be washed in the aquifer. For this reason, the area of Le Cetine is considered in district plan of decontamination “brief term”, therefore urgent decontamination.

The urbanistic plan considers the ex-mine village of Le Cetine as tourist accommodation destination. Even if there is the will of creating a mineral park the main goal of the major is to repopulate Chiusdino. The area is considered valuable both from the landscape and environmental point of view. In fact, it is protected by L.R 39/2000 and DM 73-1973, and it is closed to SIC areas protected by “Natura 2000” (Montagnola Senese e Alta Val di Merse). Plus, in 2007, it has been located in the area a Geosite, a in other words a site valuable for the Region from the geological point of view. It is also significant that all the decontamination process made to avoid pollution will create large release of carbon dioxide and the risk to destroy the refuge of an endangered species, such as bats which are protected by EUROBAT. We have discovered that the area needs to be isolated in order not to free the moving antimony in the water even though it is present in small quantities as it is stated by the project, but we are still puzzled by the will of reutilize the contaminated soil to close the mine’s tunnels. Furthermore, we are perplexed that the project involves the remodeling of the entire surface in regular steps, while now the surface is like natural. The executive project, currently being drawn up, should consider the Regional Remediation Plan (issued after the approved operational project), which provides for a cost-benefit analysis and in particular carbon emissions.

In conclusion, we have been surprised by the will of the major to create a park as we were convinced that the goal was just the repopulation. We definitely want to know more and therefore we will meet again with the Sardinian archive, the major and geologist and regional specialist to understand the evolution of the project and analyze the reason why the mineral park was closed so early not giving the possibility to appreciate this wonderful intriguing mine.